What is Enki Education?

Enki Education is an independent program that strives to recognize wisdom and vitality wherever they arise. In this spirit both the classroom and homeschool curriculum are informed by the work of several leading educators and a variety of methods. Central among these are:

Although we are grateful to those who have gone before, Enki differs markedly from both Theme Studies and Waldorf Inspired Programs, as well as all other approaches. The Enki approach, known as Developmental-Immersion Mastery weaves together many rich and diverse elements in order to support our fundamental premise: that the integration of body, heart and mind is key to cultivating educational excellence, confidence, competence, and well-being. At all grade levels, whether in classroom or homeschooling programs,  all academics are taught using a three fold process. This process begins with the arts and, through a series of steps, opens to full mastery of skills and concepts. In this way, we nurture the whole child, weaving together a coherent program including academics, arts, story, activities, movement, and exploration, to bring about deep learning and growth. The resulting strong and broad foundation enables the students to meet the world head-on, in a compassionate, flexible, and creative manner.

From 1993 to the present the Enki approach has been used in homeschools and in independent elementary and junior high schools in the U.S. and Canada, and in English speaking Europe and Asia.

However, in 2014 it became clear that how we were dispursing our programs was not viable and we suspended sales of Elementary programs and set out to restructure. In 2021 the first of the Elementary School restructured programs will be released. During this restructuring, in 2016, we opened our virtual junior high program, The The Enki Virtual Community School which has been a great success.

When and how did this approach begin?

In 1989 a group of parents and teachers requested that Beth Sutton, M.Ed., develop teacher education programs, and begin working with them to establish elementary and homeschool curriculum and programs. In response Enki Education, Inc. was born.

The first order of business was development of a Teacher Training Program. In 1991 we began with workshops for parents and teachers, which quickly grew into the Enki Teacher Training Program. Now entering its twenty third year, the program has served many classroom teachers, homeschooling parents, and other interested people. Students have come from across the United States and Canada, and from Europe and Asia. Much of the program is done off site through live-online courses and independent study in order to make it more accessible to adult learners with other family and employment commitments.

In 1993 the first group of Enki-trained teachers worked with Enki Education, Inc. to open both an elementary school in Halifax, Nova Scotia, and several Homeschool programs. In 1998 a group of parents and teachers began working to open a school in New Hampshire. In 2004 independent schools were opened in Colorado and New Brunswick Canada. New ventures are in the works in New Mexico and British Columbia. Over the years our program and curriculum materials have been used in preschools, home schools, homeschooling cooperatives, and independent elementary and junior high schools. 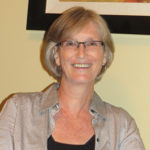 Beth Sutton is the director and core developer of Enki Education. Beth has been a certified teacher in several states, and is also certified in Waldorf Education. She has been a teacher and director of schools and camps over the last 52 years, and is experienced in Traditional, Experimental, and Integrated Day/Emergent Curriculum, and Waldorf methods. She has taught in both Waldorf Schools and Waldorf inspired programs, as well as Enki Schools.

Beth’s commitment to multicultural education is grounded in her own childhood, throughout which she had the great fortune to be educated at the United Nations International School. Her understanding of the importance of the dynamic interplay of the individual and the community was fostered at Camp Robinson Crusoe, under the guidance
of Josh Lieberman, father of progressive camping, during the nine years she spent there.

Along with her commitment to bringing the children a fully integrated educational experience, Beth has always been passionate about helping children tackle their learning challenges through movement. This led her to study and work with Sensory Integration beginning in 1979. Over the years she has gone on to study: Educational Kinesiology (Brain Gym); Diet and Remediation; the Irlen Method (dyslexia); and she is currently completing her instructor’s training in Rhythmic Movement Training with Dr. Harald Blomberg; and has independently studied the trauma work of Somatic Experiencing. She brings all of these approaches into the children’s daily experience through this fully integrated curriculum.

Beth began working with homeschoolers over 20 years ago and homeschoooled her oldest grandson for 6 years. She is the mother of three grown children and the grandmother of seven. 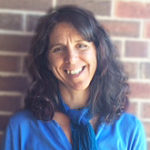 Amy Wallace is the Associate Program Director for Enki Education. Amy’s passion has always been in guiding new birth, and her background is in midwifery where she is both a nurse midwife and a professor at Regis University. Through the births of her own children and her commitment to guiding them on a positive path, Amy began homeschooling.

Amy has been homeschooling her two children with the Enki approach for the past 17 years. In 2010, she began leading a multi-aged, homeschool enrichment program, as well. Over the years, she has done in-depth study, both in groups and in private classes, with Beth Sutton. In 2007 she was asked to join in supporting Enki families in an official post. This began as work with online groups and parent consultations and grew into work with curriculum and program development. In 2013 Amy became the Associate Program Director of Enki Education, and as such is engaged in all program creation, guidance, and decision making. We are very fortunate to have her particular experience and perspective guiding Enki. 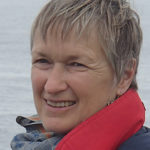 Jackie Mitchell, one of the original Enki teachers, joined the Enki faculty in 2017 to teach in the Enki Virtual  Junior High. Jackie is an Enki trained teacher who taught in the elementary grades for 20 years at the Shambhala School in Halifax, Nova Scotia, using and developing Enki materials. She is a founding member of the parent group who started the Shambhala Elementary School and was in the first Enki teacher training group in 1993.

Jackie’s background is in sociology and dance therapy in which she has undergraduate degrees. She is currently writing a thesis on curriculum development to complete her Masters degree in education. At present, she is in Bhutan where she is designing an integrated secular curriculum at the middle school level for young Buddhist monks. The product and experience of this work will be an integral part of her thesis. Born and brought up in Scotland, she has also lived and worked in France, Portugal, the USA, and now Bhutan, but has spent most of her adult life in Canada. She has a lifelong passion for education as a vehicle for transformation. She has two children, now grown up, both who were educated in the Enki approach in their elementary years at the Shambhala School. 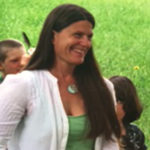 Perekin Hubner is now in her 6th year of teaching Enki Elementary Grades at the Applesong Cottage School in Colorado.  In 2011, with over a decade of standardized teaching under her belt, Perekin (Perky) wished for a more holistic experience for her own children as they came of school age.  Enlivened in the outdoors, Perky also longed for a program rich with nature-connection. She serendipitously met Applesong Home-school Cooperative, was introduced to Enki Education, and engaged in the  Enki teacher training.  She began to transform her way of living and learning with children.

Over the past ten years, Perky has guided several groups of children through the Enki approach, in grades Kindergarten through Fifth. Concurrently, she earned an M.Ed in Holistic Education for the Primary Grades through Lesley University, with a focus on Enki Education and an emphasis on nature-rooted education.

Perky’s most cherished teacher experience is being enveloped in a moment of wonder with her students, usually in the forest, by the river, or in the school garden.

Perky has 3 children aged 12, 16, and 19. The two younger children were educated in Enki programs from kindergarten through Grade 6.

Tegan is a mother of four children ages 6 to 17 years, all of whom have been and/or are being educated with the Enki approach.  Tegan began leading education programs for children and adults as a park naturalist from 1995 to 1998. After this,  she moved to New Brunswick and developed global & environmentally focused field trips and experiences for local schools.
In 2008, Tegan, along with other parents & grandparents who shared a vision for a rural community learning hub connected to nature co-founded the Knowlesville Art & Nature Centre.  She is the managing director,  pedagogical lead and head teacher for the Enki program which is offered there for children from preschool to Grade Five.
Tegan has a Bachelors of Environmental Science from the University of Guelph, an Early Childhood Educator certificate from the North American Montessori Centre. She has worked with Enki Education for over ten years and has completed her 4 year Enki professional teaching training.  She is now a member of the Enki Teacher Training Faculty.
In addition to a deep commitment to children, Tegan has a love for the land, the trees and for growing things.  She is also a song-writer, organic farm inspector, project manager, gardener and seed-saver.  Tegan’s desire is to contribute to a society that honours gentleness, families, and working with the land and all beings. 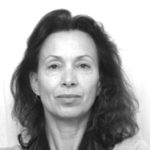 Marguerite Sands, another of the original Enki teachers, joined the Enki faculty in 2017 to teach the Enki Virtual Junior High. Marguerite is certified in early childhood ed, elementary ed, art k-12, and waldorf ed. She has a BA (Sarah Lawrence College, liberal arts/arts), an MA (Goddard College, art/ed), Waldorf Teaching Cert (Antioch NE), and is a graduate of the Enki Teacher Training program and member of the first Enki training group in 1993.

Marguerite has been teaching since 1990, and has taught in Green Mtn Waldorf School, grades 1 through 4/5, Shambhala Elementary School grades 1 through 6, and she team-taught & assisted in developing curriculum for a
graduate-level course at Mt St Vincent University. 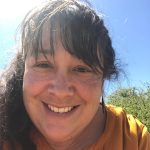 Emily Aversa makes her home in Silver City, New Mexico with her husband and daughter. She comes to the Enki Virtual School with 21 years of teaching experience with 1st through 7th graders in mainstream and charter schools in New Mexico.  She was thrilled to discover Enki Education in 2013 after searching for an educational model that reflects her deep commitment to honoring children’s developmental needs and personal paths in a holistic and enjoyable way. Enki Education has struck a deep chord in her from the beginning. She is now teaching in the Enki Virtual Community School.

Emily has completed the Enki Education Teachers Training Program. She holds a B.A. in English literature, a Master’s degree and state license in Special Education K-12 with additional training dyslexia remediation, and a license in General Education for teaching Reading, Writing, Math, Science, and Social Studies to students in grades k-8. Outside of education, her passions include art, music, hiking the Gila Wilderness of New Mexico and exploring the world in person and through books.

Melissa Rumianowski began her Enki training in 2014 and co-taught grades 4 and 5 in an Enki Program at the Applesong School in Colorado 2015-2017. Melissa has always felt drawn to spend her time with children and teens.  Over the years, she has worked as a teacher in various classroom, outdoor and homeschool setting, as well as nanny, mentor, and teaching assistant.

Melissa is passionate about Enki Education and delights in the sense of community that springs forth in each group.  Melissa has her BA in early and middle childhood development, and is working on a masters degree through Self Design Graduate Institute, including her Enki training in that program.  She has a deep love for learning about medicinal plants, dance, and sustainability. She is the mother of one toddler, Wyatt.